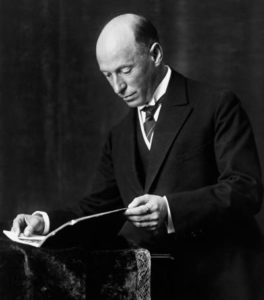 Abd-ru-shin, the Author of In the Light of Truth – The Grail Message, was born on April 18, 1875, in Bischofswerda, Germany, with the given name Oskar Ernst Bernhardt. While developing and writing the lectures of his Grail Message, he took the name Abd-ru-shin, which translates to “Servant of the Light.”

The Author spent a happy childhood in the small Saxon town of Bischofswerda. Following completion of school there, he was trained in commerce and served a business apprenticeship in nearby Dresden.

As an independent merchant and business owner, and later as part-owner of a larger import/export firm, Oskar Ernst Bernhardt travelled extensively. His experiences and impressions soon prompted him to set aside the mercantile profession in favour of his literary inclinations, and from 1907 he worked solely as a writer, producing travelogues, short stories and novels. As a playwright, he gained notable success.

A year-long stay in New York, from 1912 to 1913, was followed by a journey to London where the Author intended to further his education, but—as a German national (now forty years old), at the outbreak of World War I—was arrested and interned on the Isle of Man, in the British Isles. Through four years of imprisonment, from 1915 to 1919, the Author experienced the inner distress of a humanity which could no longer find a way out of the chaos of the old collapsing system of values. A recognition and knowledge of vital, overarching connections, and the wish to help suffering human beings awakened within him.

In 1923 the Author began giving public lectures (based on these recognitions) and publishing them using the pen-name Abd-ru-shin. Not only did the name Abd-ru-shin express what he understood as his mission—to be a servant of the Light—it expressed what he lived, and struck a chord from his first, preparatory earth life at the time of Moses, to his time as bringer of the Grail Message. It affirms the concept of repeated earth lives, a central premise of the Work In the Light of Truth.

In 1928 Abd-ru-shin settled on Vomperberg, in the Mountains of the Tyrol, near Innsbruck, Austria, and there he completed his Grail Message. Ten years later, in 1938, Austria came under German occupation. The National Socialists seized his property, In the Light of Truth was banned, the distribution of books and the furthering of his Work forbidden, and the Author was arrested.

After six months of imprisonment in Innsbruck under oppressive conditions, he was forced to leave occupied Austria. Eventually, Abd-ru-shin found refuge in Kipsdorf, in the Ore Mountains of Saxony. During this time of house arrest, his requests to be allowed public activity and to receive visitors were denied. He was under constant supervision and surveillance by the Nazi Gestapo.

The Author used the year of exile for the revision of his Grail Message, and determined that only this final edition be designated for distribution. But isolation and repression had its consequences: on 6 December 1941 in Kipsdorf, at the age of sixty-six, Abd-ru-shin suffered premature death.