After the publishing of the “large edition” of the Grail Message in the year 1931 – so called in contrast to the “small edition” of 1926, – 59 serialised individual lectures were published up to 1934. 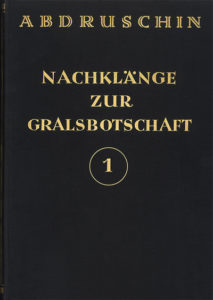 These 59 individual lectures were compiled by him along with the lecture “Unsubstantiate” and the epilogue “How the Message is to be absorbed”, as the work “Reverberations of the Grail Message” Volume I, and published in this form also by the publishing company “Der Ruf” LLC, Munich, in 1934. (Table of Contents in the annex)

The sequence of lectures in the “Reverberations of the Grail Message” Volume I also deviated from the sequence of the previous publishing as individual lectures. For example, at the beginning of this edition, there was the lecture “The Holy Word”, which had previously been published as an individual lecture with the serial number 25. Also some individual lectures were given new titles, for example, “The White Knight” as “The Necessary Balance”, “Christmas 1932” as “The Star of Bethlehem”, “On 30 December 1932” as “A New Law”, “Good Friday 1933” as “It is finished!” As well as “Easter 1933” as “ Let Easter arise within you!”

There also followed the still unnumbered individual lectures “Pentecost”, “Everything must become New!” and “The Mountain of Salvation”.

The author may have originally planned to compile a second volume of “Reverberations of the Grail Message” from these individual lectures. As a result of both the historical and the spiritual development, this never happened. Should such an edition of “Reverberations of the Grail Message” Volume II currently be in circulation, there is no way that it could it be authentic.

In the last booklets of the magazine “Die Stimme” hints were made about the increasingly difficult market conditions and it was explained that the appearance of the next booklet would have to be postponed to July 1938.

Neither the publishing of further “Die Stimme” booklets nor the eventual release of a Volume II of the “Reverberations of the Grail Message” could be achieved. In March 1938, the imprisonment of Abd-ru-shin by the National Socialists took place. In September 1938, this was followed by banishment from the annexed Austria, first to Schlauroth near Görlitz, and in March 1939 to Kipsdorf (Erz mountains).

Because of health concerns, our public readings, roundtables, and seminars are postponed in most countries until at least the end of June. However, we continue to be available for your questions and cordially invite you to contact us by phone or email, also for information about events in your country.

And in these extraordinary times, I would like to point to our main title, In the Light of Truth – The Grail Message, which is my source of confidence and support in all life situations. The first twelve lectures are available to read on our website.

Now, stay healthy and confident! We look forward to greeting you when our events resume, hopefully soon!